Hidden away in the Erewash valley, Dale Abbey is affectionately known as the 'Jewel of Erewash'.

It is rich in history with its Abbey Ruins, All Saints Church and Hermits Cave.

Many visitors flock to the area each year to take in the scenery, of which the local people are rightly proud.

Dale Abbey is roughly mid-way between Derby and Nottingham, some four miles south-east of Ilkeston.

The historic importance of Dale began around 1130 when a Derby baker had a vision of the Virgin Mary, telling him to go to Depedale (the old name, meaning deep valley) to worship God.

The Hermitage (pictured above) is a scheduled ancient monument located within Hermit's Wood. This wood is a relic of the ancient forest that used to cover much of this part of Derbyshire and is itself on the County Register of Biologically Important Sites.

Although Augustinian Canons came to Depedale in the 1150's it was not until about 1200 that the Abbey of St Mary was founded. The abbey flourished and owned 24,000 acres of land until the disolution of the monasteries in 1536.

Today however all that remains of this splendid building are the 13th century east window and the abbey gatehouse which is behind the former Methodist Chapel, now the Gateway Christian Centre. The former gatehouse was used as a jail in the 18th and 19 centuries.

Walls and stone from the abbey are incorporated in a number of local buildings. Excavations in the 1870's, 1880's and 1930's exposed parts of the abbey including the Presbytery.

The unique semi-detached Church of All Saints, part of which was built by the hermit, became the chapel for the abbey infirmary. The stonework by the hymn board is believed to be part of the original building.

The Church is in regular use and has hardly changed since 1634, retaining it box pews. Attached to the Church is the Verger's farmhouse, a former public house which was demolished and rebuilt around 1883. This eventually became a private dwelling, which it remains to this day.

To the east of the abbey window are the earth banks which dammed the Sow Brook to make a monastic fishpond. To the north is the former village school.

The village and its surroundings were made a Conservation Area in 1972 to safeguard the beauty, peace and historic interest of the area.

On the hill north of the village is the Cat and Fiddle windmill, one of the last in Derbyshire to retain its machinery. It was built in the 18th century and is one of the oldest types of mill.

The area many footpaths enable visitors to enjoy the village and the surrounding countryside.

A warm welcome awaits you! 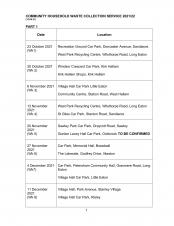 To provide residents with a free, locally based ad hoc local waste disposal option for small bulky items. These items would not normally be suitable for disposal in the black bin due to their size and/or weight. More »

Although these items could be collected via the council's chargeable bulky collection service, this service is aimed primarily at large items which residents may have difficulty handling and arranging suitable disposal. In general the items suitable for the community collection service are those that residents could take to the household waste recycling centre (HWRC) at Manners Industrial Estate. This site however is not ideally located for all residents who may not be able to use the site because of its distance from their home or a lack of suitable transport.

The community service offers an alternative disposal option for household waste streams that are not specifically catered for by current collection/disposal services. This service provides greater choice and better value for residents. It also avoids residents having to incur unnecessary costs for disposing of small household waste items using the bulky collection service. In addition, according to annual data collated by the council, household waste is most frequently found in unlawfully fly tipped material and the scheme may help to encourage a more responsible approach to waste disposal.

The service also offers residents the opportunity to dispose of small unwanted/broken electrical items such as toasters, irons, hairdryers and kettles.

The types of items that could be disposed of via the community collection service are:

This is an indicative list only and other waste streams may also be suitable for disposal via the scheme.

Waste streams that are excluded from the scheme are those items more suited to a chargeable bulky waste collection, kerbside collection or which require specialist disposal arrangements: -

Provision of the Service

The service will be provided by siting a council refuse collection vehicle (RCV) at agreed site locations to which residents can bring their waste items for disposal. In addition to the RCV a caged 7.5 tonne vehicle will also be deployed for collecting small unwanted/damaged electrical items and scrap metal.

Each chosen location will be manned throughout the day by EBC staff to offer advice to residents, provide marshalling duties and to ensure only suitable items are presented for disposal. Notices will also be displayed at the designated sites to warn residents that leaving household waste items outside the specified collection times would constitute fly tipping. The service will operate 8am to 11.30am to allow sufficient time to deliver the waste to the tip.

Since the loaders/drivers are trained in manual handling they will be expected to load waste items into the RCV to avoid the risk of personal injury to service users.